What are the basics of tuning a bassoon reed?

In the simplest terms you manipulate the length, strength, tip opening and tapers of the reed blade. Adjustments of the reed will affect the tuning not only of individual notes but of entire registers and their pitch and response. 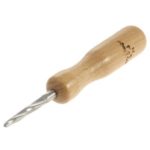 The design of the reed is also a huge factor. This includes the hardness of the cane, the blade taper (profile), the reed shape (narrow, curved, wide), and the spacing of the wires. Each of these factors influences the tuning of notes in different registers (high, middle, low notes).

What is the correct blade length?

What often determines the correct blade length is stability on key notes such as one finger E (3rd space bass clef) with proper pitch on all the other notes. Blades that are too long or reeds that lack sufficient strength often go flat on this E if played loudly. Cane that is too soft and reed shapes that are too wide often contribute to a sagging E.

The best measurement to use for the blade length is actually the measurement from the tip to the first wire, which includes the area of bark between the blade and the first wire, called the collar. This critical dimension is called the vibrating length. There is no correct vibrating length, but the length can range from 27 to 33 mm from the tip to the first wire. This depends largely on the design of reed and the amount of breath support (the force the player uses in blowing) and the position of the lips on the blade. Generally, a longer vibrating length will favor the low notes and may create problems for the high notes and vice versa: a shorter will favor the high notes. If you use strong breath support with thicker blades you can use longer lengths.

It is critical for the first wire to stay in position when the reed is wetted and ready to play. If it strays from this position, the vibrating length is changed and will create a flatter pitch and instability on some notes.

My personal reeds range from 28-28.5 mm and if my reeds don’t work for me at that length I set them aside. I know that my embouchure will tire or I will play out of tune if I’m way off from my vibrating length preference.

Some teachers insist on using a set blade length. This dogma makes for difficulties. When I first started making reeds my teacher told me to make all my blades exactly 1 inch in length. How wrong he was! He had me measuring from the tip of the blade to the ledge (edge of the collar and blade) where the scrape ends sloping up to the bark. But not to the wire. The space between the 1st wire varied from reed to reed, so my reeds all played quite differently. I had to reinvent my embouchure with every reed. Bummer!

So if my reeds all go flat on E what do I do? You mentioned both length and strength.

Yes, the blade needs more strength to support the E. So, you can try:

If that doesn’t do it, then the reed’s vibrating length (from the tip to the wire) and blade must be manipulated. You have a choice of:

By clipping the reed tip back or narrowing the reed tip blade you are giving the blade more strength because it is thicker at the tip. If you keep clipping and clipping but the E keeps sagging, the cane may be too soft. Also the design of the reed may not be right for you with a throat diameter that is too big around. A reed tip that closes in the center first when squeezed between the fingers is a sure sign that it will be unstable on E. Correcting the problem may take several steps outlined in Preliminary Tuning Q & A.

Many reeds purchased from music stores are poorly constructed. In a recent test, three reeds made by different manufacturers all purchased from a music store and labeled medium hard failed to play a stable E and the blades weren’t too long! No wonder so many of you are suffering with your reeds making it difficult to enjoy your bassooning. There are many choices available online with reeds of different styles and every bassoonist must experiment to find what works best.

Do store reeds come in different lengths as well as strengths?

No. If you buy from a reed maker who sells them directly to you it’s possible. Some companies will do custom reed work. However, reeds purchased from music stores can’t offer you lengths and apparently don’t really control the strength either.

How should I approach clipping the tip? Is there an easy way to do it?

The easiest way is to buy an expensive reed clipper which are available from double reed supply specialty shops. There are clipping devices and nippers sometimes referred to as precision end cutters. That’s what I use, but the really good jewelers end nippers cost about $75.00. The old fashioned way to cut tips was to purchase a billot made of wood (a cutting block) and take your reed scraping knife or razor blade and cut through the reed tip as it is laid across the billot. A big problem with these though, is that the top of the billot is usually curved, making it difficult to cut a straight tip. Some will file or sand the billot top until it’s flat and wide enough for the tip of the reed. That’s better, but we don’t recommend using a billot and knife.

The poor man’s version of the reed tip clipper can be effective and cheap. Buy a large thick guitar pick with a smooth surface on both sides and a single edge razor blade. Place the guitar pick on a flat surface, lay the reed tip on the guitar pick, align the razor blade with the tip with the amount of tip you want to cut off and press the razor blade straight down into the guitar pick with enough force to cut off the tip. It’s always best to take very small amounts off the tip and test your results. Taking too much off in one shot may leave the reed now too strong, requiring scrapes or sanding of the reed’s blade or additional wire adjustments.

What do I do with a reed that is too hard to blow or plays sharp? Should I pull out the bocal?

A reed that is too hard to blow can cause frustration for a beginning player. Try the following:

These will all help lower the pitch, as well as the pitch of the reed’s crow. Pulling out the bocal may help lower the pitch but produces undesirable resistance in what should be a continuous conical bore. If you are playing on a #1 bocal, switch to a lower-pitched bocal (#2 or #3).

How much does the taper of the reed’s blade need to be manipulated?

That depends on your needs. Do the low notes speak, do the middle notes croak, do you tire or play out of tune, are other notes unstable?

At the very least the reed should be stable and the note next to the one finger E, the forked Eb, should not be sharp if fingered with only the first and third finger of the left hand with the whisper key. No added keys in either hand.

If you are having problems you’ll need to know how to fix these things if you want to advance as a bassoonist. Students need to know that it’s more important to know how to adjust a reed than to make one. Rather than waste your time making bad reeds due to inexperience, find a good reed maker whose reed style and reed shape works for you. Check out the Quick Guide to Bassoon Reed Tuning which is available from double reed specialty shops. Good luck with all your reeds!

Check Out Our Products