There are low As throughout the Mahler Symphonies. Not all have them. They also are in one or more of the Strauss works and Wagner’s Ring Cycle has one or two as I recall. It also appears in the woodwind quintet by Nielsen and Paul Chihara’s Branches for two bassoons and percussion. I’m sure I’ve fagotten a few. Haha. 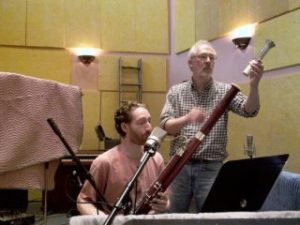 Leon and Mark with low A

Some would take an English horn bell and stick it into the end of the bassoon in the Nielsen Quintet, or a rolled up piece of paper or cardboard tube. These work okay, but lack in resonance and good pitch. We always covered these low As with a piece of plastic plumbing drain pipe. I made a fancy matching set for Bob, Juan, Bonnie Cox and myself with a plastic base and metal end with a nice flair. It’s fun to blast a low A. Peter Schickele, a bassoonist himself, wrote a low A solo in his Lip My Reeds for bassoon quartet. We are recording that with Leon Chodos and Mark assisting on the low A for Lip My Reeds which goes back and forth with low Bb. That’s what we’re doing in the photo and you can hear the results on our Escaped CD.

These “extensions” can be purchased too at Forrests Music, a double reed shop, but not as elegant as my design.

I have no idea of the first use of the extensions, but it also applies to contrabassoon and I believe there may be a case of one written part that went to Ab for contra. There are probably those like me throughout history who wanted to get the low down. We did a Bassoon Brothers show where we did a contra Ab. Niel, you were there with the schreeching brakes in the Berlioz In the Country bit.

The Heckel bassoon company, founded in 1831, offers a second optional low A bell to go with the standard Bb on their bassoons These possibly dating before 1900 and they still have A bells available for contrabassoon.

The contra once owned by the Oregon Symphony, now at Lewis and Clark College has a low A bell and a C Bell on an instrument made by Mollenhauer. That was a common arrangement. The word probably got around Germany and the composers picked up on the low grumbling possibilities. Heckel is in Wiesbaden Germany. The Heckelphone is another oddity that shows up in some scores, something like the bass oboe. The development of this instrument was initiated by Wagner in 1879. See the comment here: http://www.heckel.de/en/prod-heckelphon.htm

As for the practice of using these in the Mahler scores. It is usually found in the 2nd, 3rd or 4th part. But I think I had at least one in the 1st. In some cases the bassoons are in octaves in these low A passages. If the A is preceded by a Bb it is not possible play Bb with the extenison in place. When this happens, the 1st bassoon can insert the extension and drop to play the low A so the Bb can be played by the (4th bsn?) who jumps up to cover the 1st”s A in the staff. So, we wrote in these things so we could play what was actually written.

Bassoonists will not be put out by doing the low As. It’s fun and a challenge. If the low A is preceded by a low B, the tone on B is stuffy, but usually works okay. The extension does cause a change in the resistance of the instrument that can cause pitch problems. So, it’s a good idea to get it in at the last possible chance and out as soon as possible. I always parked mine on a trumpet stand so I could make a quick grab.

You can buy the plumbing at a hardware store in plastic or metal for a couple bucks. It’s easier to cut the plastic to the proper length. We’ve done extension well below A with plumbing pipe just for fun.

Now you know more than you ever wanted to know about low A’s.

Check Out Our Products

Bassoon Audition Advice I went to take my bocal out and it just spun around! The cork has separated...
Scroll to top